April 02, 2018
Last week I was really upset about how poorly I felt I was progressing in my training. During the last few sessions, I kept on getting smashed on the mats and was feeling so clueless at times – as though my skill had just disappeared.

I know I was putting a lot of unnecessary pressure and expectations on myself because it was my 6 month 'anniversary' of starting Jiu Jitsu, but it felt very real. And that, coupled with months of a weight loss plateau - and knowing that still being overweight is impacting on my agility and abilities, really started to get to me.

But, after talking it through, and some beautiful supportive words from my husband and my Jits sister, I chose to stop feeling sorry for myself and see this differently.

I asked myself what this lesson was teaching me.

It wasn’t that long ago that I couldn’t even walk more than a block because I was so overweight, unhealthy and unfit. Now I’m 70kgs (154lbs) lighter and training Jiu Jitsu! It’s not like I chose the easiest thing on the planet to start training in.

So maybe I’m not progressing as much as others might in the same amount of time, but damn, I’m learning both BJJ and how to drive this ‘vehicle’ that is my ‘new’ body at the same time. So I really need to stop being so hard on myself, and just trust in the journey. I'll make it in my own time.

Am I progressing every time I get on the mats? Yes! So that’s all I need.

And let's face it - this wasn't the first time I've felt this way, and I know it certainly won't be the last. And that's just all part of the journey.

It was time to stop the pity party, put on my big girl Gi, and just keep training.

So I went to an extra training session at the end of the week - the only female amongst a group of men (another accomplishment to be proud of - 6 months ago I'd never have done that!) - and got on the mats and spent an hour and a half rolling with Purple, Blue and White belts.

I got smashed, repeatedly. I even nearly had to tap out about 5 times just from being crushed and breathless under their pressure - but I kept going.

Every minute provided me with opportunities to grow, learn and improve.

At the end I felt like I’d been hit by a truck, but it felt damn good.

The earlier-in-the-week version of me probably would have ended up crying on the mats 10 minutes into that session. But this new version of me left the Academy smiling (and limping a little bit...)

In our lives, every 'failure' and setback presents either: a lesson and opportunity; or defeat and another reason to beat ourselves up for not being 'good enough'.

And it's entirely up to us which way we choose to see it.

The next time you feel as though you've failed or there's been a setback in your plans, ask yourself what this might be teaching you.

What lessons and opportunities are now presenting themselves to you?

Put your trust in the Universe, look at the situation with a new perspective, and you'll find yourself  back on the right track.

And this time you'll be even and stronger and wiser than before.

Connect with me on Instagram here.
Visit me at my website here.
Or you can join my fb group here, and find my fb page here. 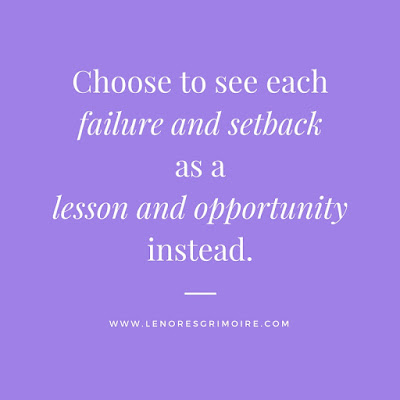 Popular posts from this blog

March 12, 2018
So, let's be honest. I can be a pretty clumsy person at times - and 'graceful' is not really a word you'd use to describe me. But, this week at training (BJJ) I managed to clunk my way through one of my most clumsy, ungraceful moves yet.

I'd hurt myself a bit in the first drill of the night, but was far too stubborn determined to stop training. I was only 5 minutes in and I really needed time on the mats for some 'Jits therapy', so I just decided to take things a little easier but to definitely keep going.
During one move,  I was particularly ungraceful and managed to wrench my back pretty badly, with some serious crack and pop noises to accompany the pain. So I stopped, gently moved around, and was pleasantly surprised to find that everything felt okay.
(Cue: false sense of security).
I took it fairly easy for the rest of the session, and rolled light - but did get a damn fine guard - sweep - mount move in, which I was pretty proud of (let's not talk …
Post a Comment
Read more

December 18, 2017
Determination to push past my comfort zones and self-imposed restrictions has played a major role in my goal setting this year - and one of the biggest goals that I set myself was to start learning a martial art.
When I first told my family that I wanted to start learning Brazilian Jiu Jitsu (BJJ), they laughed because they thought I was making a joke. They weren't being cruel, they honestly thought that I was trying to be funny because this was such an unexpected thing for me to tell them. I'd secretly wanted to learn a martial art my whole life, but the reality was that from a very young age I was far too big for activities like that. When I was at my heaviest, not only was I completely unfit, but I could barely walk 100 meters without severe pain in various parts of my body.
So learning a martial art was certainly not a possibility, and so I gave up on the idea. It became just another unfulfilled and almost-forgotten dream for a long time.
At some point over the ye…
10 comments
Read more

December 11, 2017
I believe that goals are an important part of everyone's life. They give you passion, drive, aspiration, inspiration, motivation. And ultimately I believe they give you hope.
On some of my darkest days, it's the heavy weight of hopelessness that's probably the hardest thing to overcome. Depression is a cruel beast, and being able to see any light on the horizon can be very difficult when you're in that dark place.
But I believe that hope combats despair, so having a glimmer of hope amongst the darkness has been one of the best methods I've found to help lift me back into a better space.
Earlier this year I decided that I needed to set a lot more realistic and achievable goals than I had in previous years, and that goal setting (and, in a way, 'life planning') was going to be a priority and a new method of managing myself, my wellbeing and my time.
I need routine and I need goals - and I need to try to keep my mind occupied with good, healthy and positive t…
Post a Comment
Read more